Supra was entrusted to perform belt installation and splicing of Freeport Indonesia DMLZ project. The 6,500 tph downhill underground conveying system is one of the most challenging system and is the highest strength of belt in Indonesia. The underground crushing and conveying expansion project if fully developed will be the largest of its kind (block cave mines) in the world with the DMLZ stage 1 being 1 of 5 phases which is estimated for full total completion by 2020 for all 5 stages. The belt installation involved the controlled lowering of 1,800mm wide ST5400 down a decline of 15% (8 deg) angle x 1,250mtrs long from the top head end via both twin hydraulically and pneumatic type braking systems with dynamic forces up to 40 ton.

In total, over 8,600mtrs of belt was installed via controlled braked lowering method. Due to space constraints belt reels of 192 mtr long x 26 tons could only be accommodated. There are total 47 splices with 4.9 mtr splice length.

Steel cord belt change-out 12.8km of C-26 overland conveyor belt at Bontang Coal Terminal. C-26 belt conveying coal at 3,700 t/h travelling at 7.2 m /s from stockpile to the coal load-out system. The 17 rolls of new belt to be pre-spliced and flake-out in 2 stacks and pull in one continuous length within 4 days. At the same time, the belt winder reeling old belts into empty belt reels. The project was completed in 30 hours ahead schedule with no accident. 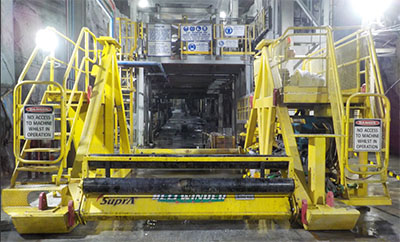 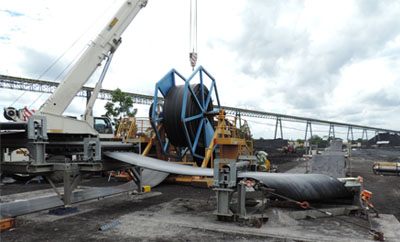 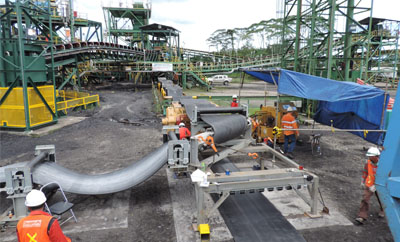